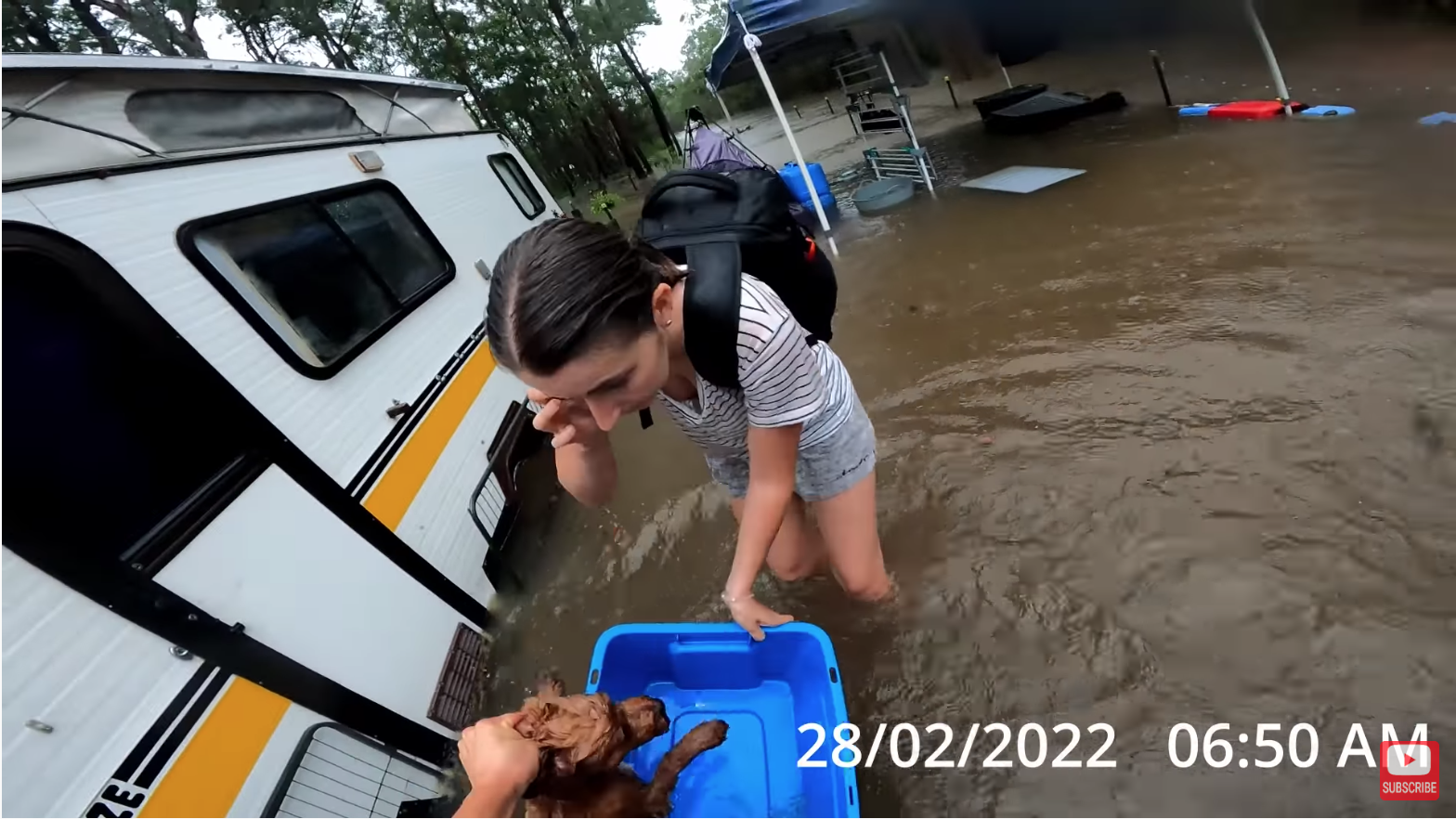 We woke up at 6:30am 28th February 2022, looked out the window and we were surrounded by water, water was already coming in through the caravan door.

We called SES/000 and got an automated message saying they couldn’t take our call… we then walked 1km to our neighbours who took us in and gave us a place to stay.

The water ended up coming 2.7m high, our caravan, car etc were all completely under water.

The experience was very scary as we didn’t know when the water would stop rising or when help would come and we had very limited reception, so we relied on the ABC radio for updates.

Most people in our community spent 24-48 hours on their roofs before they got rescued and after the flood waters went down the community really came together and everyone did everything they could to help each other.

We are staying with family while getting back on our feet, figuring out what to do next, as we were just about to build a house there.

I think we learnt a lot from what happened, how to be better prepared next time and it showed what a great community we have (we had only moved there 6 months ago), which we are really grateful for.

000/SES weren’t there to take our call when we needed them but the community was, it’s always good to get to know your neighbours/community, we are grateful we did before the flood happened otherwise who knows what would have happened.

Off the Grid City Couple a youtube video of our experience

After several days of heavy rain our roads were fully underwater and we were isolated from the rest of the world on a small island shared by only a small number of other neighbours.

We had previously discussed the flooding with various neighbours who had been there for 40+ years, who told us what to expect – you’re normally stuck on an island for a week or two and the highest the waters ever get is below knee deep (this is very rare).

We thought our only challenge would be to ration our supplies, and were excited to take some beautiful footage of the water. But just as we thought the roads would clear, the situation got a lot worse.

One week after the initial floods, we had a night of heavy rainfall and woke up to water pouring in through the front door of our caravan and had to evacuate as fast as we could to a neighbour’s workshop.

Thankfully, we had our most important belongings already packed the night before, and we knew a neighbour who was happy to take us in when we were in trouble.

Another miracle was that by this point our solar power system was still above water, which meant that our phone signal booster allowed us to make the call to let them know we were in trouble.

What we can learn from this video is that real superheroes don’t wear capes. They’re just normal people going about their lives, until a situation arises where someone is in need. The other important thing to stress here is that our situation was way too close for comfort.

At any point there is a chance of a natural disaster it is a MUST to expect the best, but to still be prepared for the worst.

We’re Alex & Sarah, a young couple on the North Coast of New South Wales, Australia, who decided to move off grid and leave the city life behind in search of more peace and simplicity, building our Fully Off Grid Home & restoring our Overgrown Organic Tea Tree Plantation.