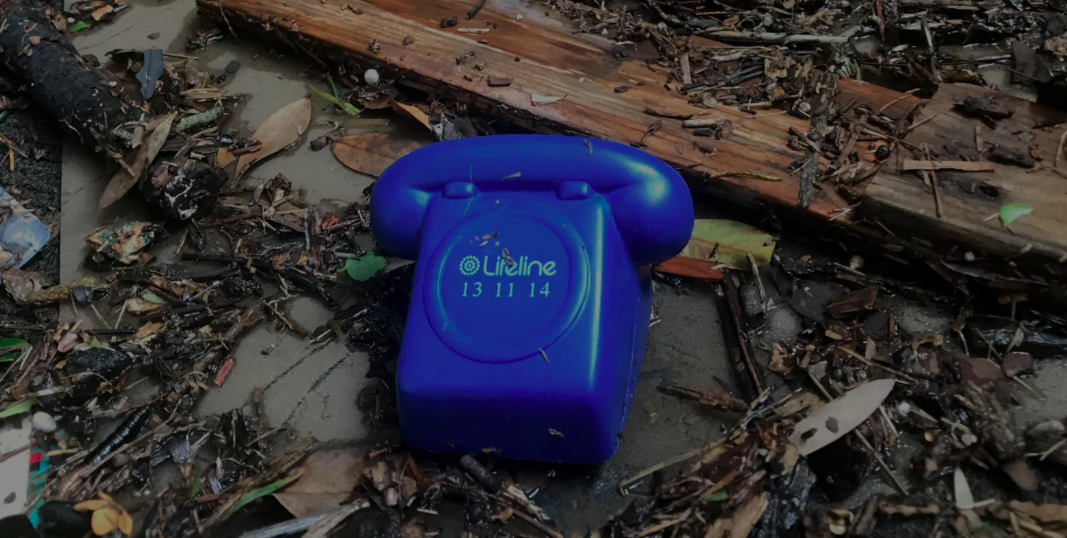 Charles Dickens once wrote It was the best of times, it was the worst of times.

Just like everyone remembers where they were when they heard about Princess Diana or 9/11, February 28 2022, will be forever one of those worst of times for the people of Lismore, etched into their memory of exactly where they were at the time.

To tell the story of the last seven days, I have to go back 12 months.  In early January 2021, I arrived in Lismore with my family, with one week of confirmed accommodation and all the belonging we could fit in our two cars.  I had just accepted a job as the General Manager for Lifeline in the Northern Rivers.  We had lived in Sydney all our lives, COVID was putting some pressure on my employment, and we seized an opportunity for a tree change.

We battled with an unprecedented housing crisis and were fortunate to be in a financial position to purchase a house.  A wonderful lady came to our rescue on an interim short-term rental when she heard I was working for Lifeline.  We mourned when we heard of her passing from cancer a few months later.

We made friends, joined community, I worked hard at Lifeline, and our affection for the town of Lismore grew by the day.  I love the diversity of opinion and thought, the proximity of agriculture, regional living with most of what is needed, and coastline. I tell people it is 10 minutes to work on a good day, and 11 on a bad day.  My Sydney friends were green with envy.  While the hills were steep, I found new cycling routes through the amazing plateau surrounds.  Our extended family visited, my parents ended up buying a house too, joining the Great Northern Rivers relocation.

On February 27, I was on edge like everyone else.  This was my flood debut, I didn’t have the wealth of local knowledge behind me.  My house was well out of the flood zone, but all of Lifeline’s local operations were in the firing line.

At lunchtime, we mobilised.  Our op shop in the middle of town was the lowest point.  Floor level on Magellan Street was roughly a metre below the levee gates that protect the CBD from rising flood waters.  If the water went over the levee, the shop like most of the CBD, would be hammered.  We cleared what we could in 4 hours, and drove the truck back to our warehouse, on higher ground, on the south-western outskirts of town.

The truck went back to the depot and I turned my attention to our nearby CBD office building.  Virtually everything was on the first floor, but there were some things stored at ground level.  We moved everything we could upstairs, and well above the 2017 flood marks hand-drawn on the side of the building.

While there was flash flooding already in backed-up drains around town, I remember the rain easing off and the birds starting to talk in the trees outside the office.  I looked in the sky, and for a brief moment it was peaceful, the sky was not so dark.  In that moment, I thought that everything would be fine.

Like many in Lismore, I felt like we had done enough.  The CBD was quieter, business owners had done what they could to be prepared.  I was impressed with the calmness and planning of the locals, after all they’d been there and done this so many times before.

Less than two hours after I thought it would be okay, the heavens began to open a deluge of water like I have never experienced in my life.  Just outside of Lismore, the small village of Dunoon received over 770ml of rainfall in 24 hours – that’s more than what Melbourne usually receives in a year.  We never stood a chance.

As the evening wore on, the emergency text messages became more urgent.  As I went to sleep, lower areas of Lismore were on notice to evacuate in the coming hours.  I knew that the levee would break and that some flooding would occur.

For those, like me living only a few kilometres away from the CBD and town proper, we’ll never really understand that night and the trauma that will live with the people who live in town for years to come.  The emergency text messages came more frequently, with more urgency, with more capital letters, SHOUTING at us to take action.  The forecast predicted river height got higher and higher.  Those that thought that they would never be affected, were now being consumed by water, waking up to rushing waters through their bedrooms. And as dawn came up, there was a flotilla of boats in the water rescuing people from their roofs, and desperately searching for loved ones.  The Facebook messages in community groups were horrific, the desperation of the residents pleading for help, etched in the digital landscape, and in my mind forever.  SES and 000 were swamped.

The river peaked at 14.4 metres, lapping at the back door of Lismore Base Hospital, completely submerging the CBD like never before.  Lifeline staff that had prioritised our shop in Magellan Street lost all their possessions.  At least four of our staff are completely homeless.  Others are stuck on properties outside of town.

As hundreds poured into evacuation centres, the town rallied.  Donated clothes came from everywhere (too much, please no more clothes!), goods by the truckload.  Our family cooked meals and washed clothes for strangers, we looked after other kids while their parents helped where they could.  I struggled with the guilt of feeling like I was not doing enough, knowing that I was safe but so many in my adopted home town were not.

We battled food and petrol shortages as the region became quickly isolated.  We watched in horror as the waters moved from the Lismore basin to elsewhere,  rivers rising inundating Ballina, Mullumbimby, Murwillumbah, Coraki, Casino, Wardell and beyond.  The carnage was not Lismore alone; it was the entire Northern Rivers.

As the waters subsided, we began to understand the extent of what took place.  As I drove through the CBD it looked like CNN-style war zone footage.  Cars upside down, collapsed buildings, a random forklift on a bridge, 10cm of dirty filthy mud on everything.  Yet the clean-up crews were already on overdrive.  The Mud Army had descended on their shops and homes, trying to salvage what they could and rip out everything else from their houses.

The ferocity of the storm and the raging floodwaters rendered everything we did at Lifeline on Sunday afternoon a futile exercise.  The waters consumed our two-storey office, our warehouse and three shops, the truck we had packed.  Everything gone.  Our warehouse will need a bobcat to clear it, not the Mud Army.  We’re still waiting a structural assessment of the office building before cleaning.  I fear one shop building will have to be bulldozed.  When our volunteers called to pledge help, we encouraged them to focus that energy into others homes not our Lifeline buildings.

For an organisation in the business of helping people, I became incredibly frustrated.  Our call centre was wiped out, we had no stock to share with the community who for so long had supported our Lifeline op shops with donated goods, which in turn provides a huge revenue stream to fund our suicide prevention and crisis support services.

The phone calls, emails, online meetings, hours worked make the last seven days a complete blur.  We are however mobilising. We found temporary accommodation for our crisis support centre, replacement IT has been ordered, and we hope to be back online and answering calls to our 13 11 14 national crisis line in the coming days.

We have been asked by Lismore Council to provide a large-scale goods distribution centre at the showgrounds. Power is only just on, we aim to have the facility up-and-running in the coming days to cope with the mountain of good will coming into the region (please send cash, not goods!).

We’re scaling up wellbeing support for the team at Resilient Lismore – an inspiring community led movement that will be instrumental in restoration of Lismore.

Traffic was gridlocked getting into Lismore on the weekend.  People came from hours away to join the Mud Army, helping random strangers clean out their homes.  Make-shift BBQ’s set up on street corners, a group of Sikh volunteers drove from Melbourne and began cooking meals around the clock for the Mud Army.  After two years of turning on each other based on vaccination status and Covid rules, all that no longer matter.  Was this community unity the best of times that Charles Dickens referred to?

As we enter the second week of the recovery, I am reminded that this is a marathon and not a sprint.  The town is running on adrenalin right now, the news cycles fuelling a desperate desire in Australians to help.  It is amazing. Did I mention send cash, not goods?

But what happens in the months to come, when the news cameras inevitably turn to the next crisis in world?

When the Mud Army descends back to their own jobs and their hometowns? When the vulnerable are left to fend for themselves further behind than they already were before?

Lifeline prides itself on being in community, for community and with community.  Lifeline calls have naturally spiked, while our capacity to answer calls has taken a battering through Northern NSW and Queensland.  Thankfully our national service means that calls are still being answered by colleagues all around Australia.

Our Lifeline services were already stretched through overwhelming demand and need in the community. Even with an army of volunteers, it still costs Lifeline $39 each time we answer the phone.  That racks up real quick when an Australian in crisis is calling every 30 seconds.  Perhaps you’d like to consider becoming a volunteer Crisis Supporter?  The training is comprehensive, we won’t throw you on the phone to fend for yourself.  It costs $3,500 to train a Crisis Supporter.

Lifeline is committed to the Northern Rivers.  We will be here today, tomorrow, next year and long after the news cycle and the mud army have left.

We will be here when the silence sets in, the adrenalin has worn off, with our crisis support, our free video counselling, our community capacity building workshops like Accidental Counsellor, and a host of practical on-the-ground support like we have done through bushfires and other major natural disasters.

Michael Were is the General Manager of Lifeline in the Northern Rivers, New England North West, Hunter and the Central Coast.  He lives in Lismore.