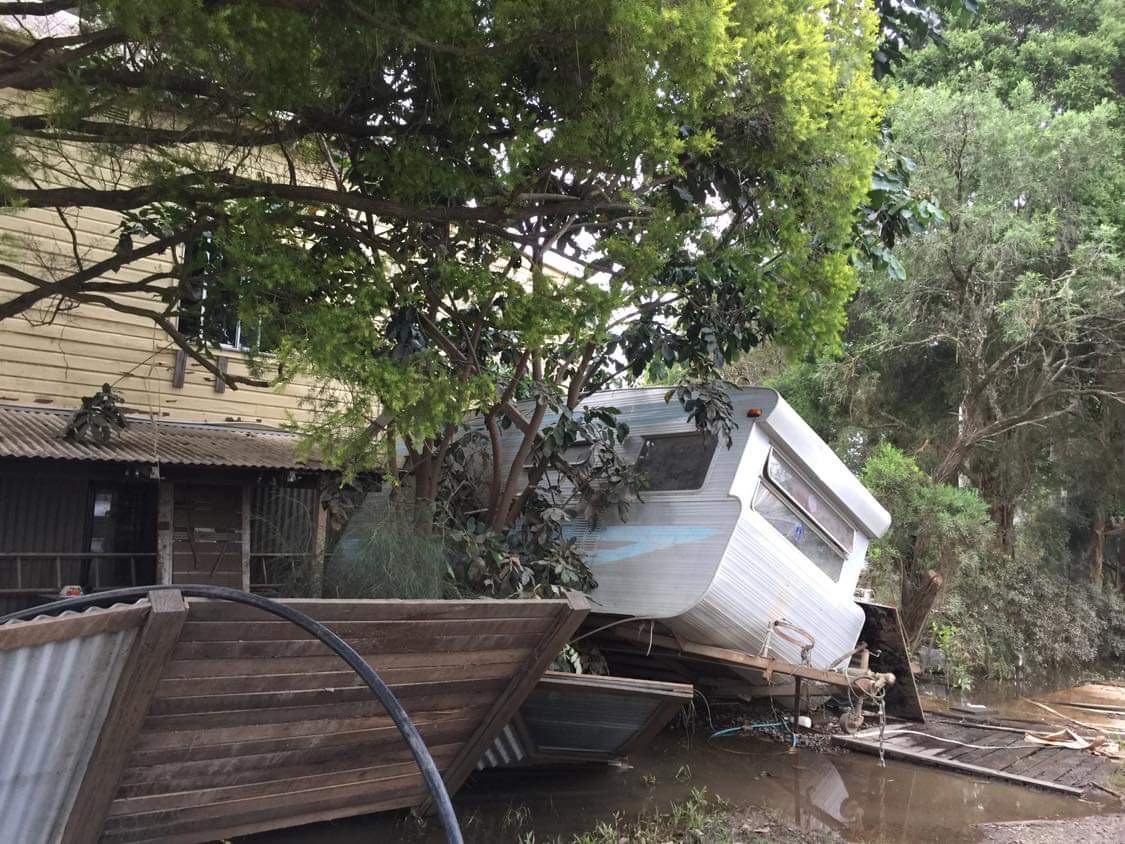 After preparing for the flood, we went to bed at 1am debating our options but we were exhausted…we woke at 3am to see water rising fast. We frantically began lifting our belongings off the floor and by sunrise water had entered into our home, rising to 14.2m.

It was terrifying… the water continued to rise and I was standing ankle deep on our one remaining un-lifted bed with my dog.

I called the SES and was told to expect 16m and to get into our ceiling or onto the roof.

Our ceiling wasn’t an option and I didn’t want to go out onto the roof in the rain but my son insisted. Eventually I had to accept that we would have to go… we waded through water and out onto our deck and my son managed to get us up and onto the roof.

I sat frozen in one spot for 7 hours whilst my son called and called for help… we smelled a house burning a couple of street away, we heard people crying out for help over and over, and the sound of machinery cutting through tin.

I was worried about my elderly neighbour who we hadn’t seen for hours and then suddenly, she appeared at her window shouting frantically for help. I called the police for help telling them that she was going to drown if they didn’t get to her quickly, water was up to her shoulders.

My son called and called for help and eventually a boat heard him and the solo boatsman approached her but as he was pulling her aboard the boat sank.

Just then he spotted two blokes on a jet ski and shouted to them for help and they sped over and scooped the boatsman and my neighbour up and jetted off with them.

Suddenly we were alone.

All our neighbours had been rescued and we were left alone.

My son kept calling and calling but the boats couldn’t hear us.

I put a post on FB to tell people we had been left behind, I msged a friend to ask her to call the police every half hour until she heard from us again.

My son was beginning to think of us having to climb higher on the steep area of our roof but we were slipping on the flat area so couldn’t think how we were going to manage the steep section? A helicopter flew over, really really low and we had to hold on for fear of being blown off the roof.

I told my son I’m not going anywhere without my dog…and then suddenly there were two boats approaching us. One boat began attempting to get to us, the difficultly being that we were at the back of the house with big trees and electrical wires surrounding us.

Eventually they came up along side the gutter and we were able to get into the boat… I have never felt such relief in all my life.

How did people in your community respond?

We were lucky … as we arrived at the evacuation centre I saw a sign saying ‘Hot Showers’ and began flighting tears …. and then a woman approached me and offered me a hug …. we hugged and I burst into tears, sobbing uncontrollably. The gravity of what had happened and what was happening hit me!!! She offered to take us home … and without much thought I accepted and followed her. We have been at her place for nearly 3 weeks now and every night I feel extremely grateful for my own room, my dry and comfortable bed. I feel incredibly blessed to taken in by complete strangers …………

What are your feelings about what happened?

Absolute disbelief, deep sorrow, bouts of anger, grief, loss and incredible gratitude for the extreme generosity of my community

What is the memory you think you will hold with you in 10 years?

I have absolutely no idea… right now its hard to even think about tomorrow… but the desperation in my sons voice, the wail of a baby crying, the absolute terror for my neighbour … offers of hugs and the boatsman will all be with me till death

Is there anything else you think is important you would like to add?

The confusion of just wanting to go home yet not wanting to go back to the devastation, the chaos and threat of floods in the future… feeling like home is a safe haven yet such danger lurks …. how to reconcile these thoughts and feelings?