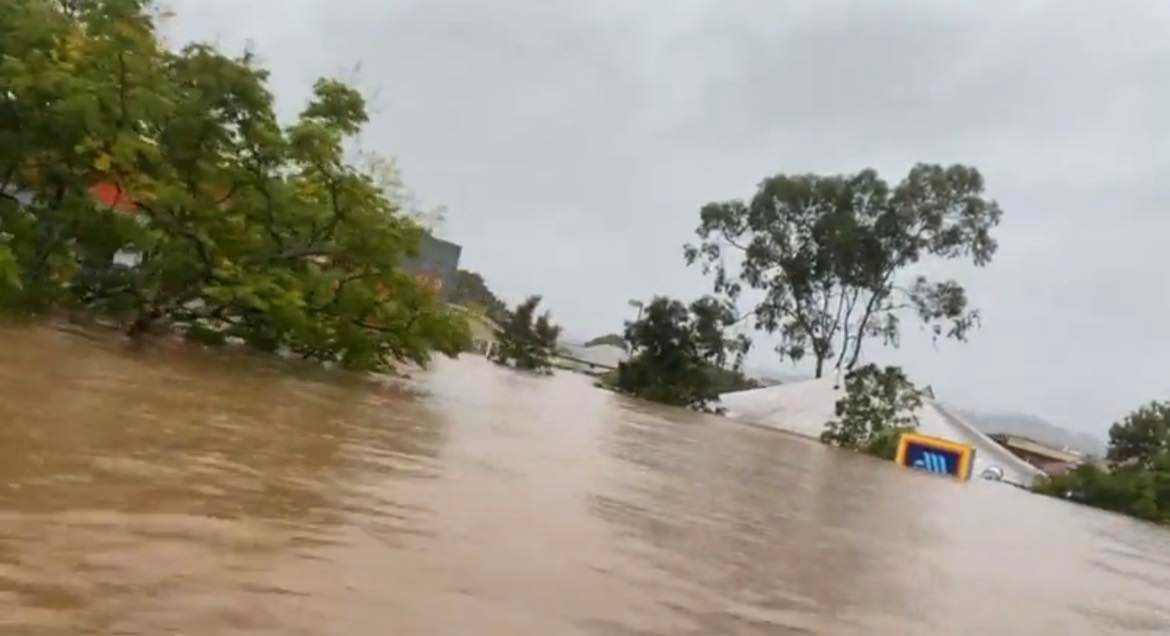 Chris didn’t grow up in Lismore, but his wife is a local, the two of them have deep roots in the area they have many family members and friends there, bought their first home there and celebrated many wonderful family times in the area.

Watching the flood predictions rapidly evolve overnight, starting off feeling safe at less than 10m, upgrading to over the levee, then above the 1974 level and beyond. They both knew many in the sleeping town would be caught off guard and unprepared. He knew it was going to be bad, but nothing could have prepared him for the harsh reality.

He packed his gear and set off to do whatever he could to help, when Chris had arrived in Lismore found 2 then strangers who welcomed him into their boat and responding to rescues immediately.

“One of the most heart-breaking things was coming to land and having people begging us to save their loved ones and handing us addresses, their despair was evident in their eyes. I had to look them in the eyes and be honest that we might not make it to their loved ones without being diverted to another rescue. That was really difficult. I wonder if we could have helped these people more.”

Later that morning as they arrived at the Ballina Street bridge, the entrance to South Lismore Chris spotted his old mate Beau, the two hugged each other with both excitement and relief to see a familiar face. They had previously worked in emergency services together. Beau was back in Lismore on holidays and found himself on the frontline of the SES’s response as one of the first SES boats into the now consumed South Lismore. Chris Asked Beau where he needs him, he replied

“There are people everywhere, just go down a street and grab them”

They continued to the streets surrounding South Lismore Public School where 46 people were trapped surrounded by the rising flood waters. They then transported many of these people back to the bridge alerting other boats along the way to help with the mammoth task.

By this time the Boatie Brigade was in full force. The locals had somehow organised themselves with an ad-hoc system, those with boats able to cross to South Lismore were performing rescues and off boarding those to the bridge, the people then crossed the bridge to again board in boats who could then transport them to safety. There were then more civilians on the bridge choosing to stay to help people on and off, turn boats and direct the flow of the boat highway and again others helping them out on arrival to land. The systematic, coordinated efforts by locals and civilians was heroic, dynamic, and effective in saving hundreds of lives. This is the responsiveness, flexibility and cohesion that rescue agencies would dream of.

“It was then for a moment my emotions got the better of me we were transferring 3 flood victims to the Ballina Street bridge. I witnessed approximately 100 victims and an additional 50 civilian rescuers, strangers working with strangers to save the lives of other strangers. They hugged, cried, and supported each other in the greatest display of Aussie spirit. Pulling your boat up to this sight It was hard not to feel overwhelmed by the strange mix of deep sorrow and great pride for the Boaties who placed their lives at risk for their community.”

The crew Chris had jumped aboard with were exhausted and decided to go in.

“We were so cold and busy that day with rescues that all I ate was a blue dinosaur bar, it tasted amazing.”

Chris soon found another Boatie Adam about to launch more than happy for company. They navigated down Junction Street where they rescued an elderly lady who was frozen with fear, stuck still clinging to a pole, she was too weak to speak, they almost went straight past.

Shortly after they were faced with a rescue Chris will never forget.

“We saved a family stuck in their roof cavity with the water still rising. I had to enter the home through a window while Adam manned the boat. It was dark inside with about 40-60cm until the water reached the ceiling, furniture was floating obstructing the path. I had to convince the single mother and her autistic son to get in the water with me to escape their home. They were very brave, especially the boy, he was extremely distressed, and I had to be forceful with him to get him to safety. It’s something I regret but I hope he will understand I was helping him. I hope he is doing ok.”

The pair continued rescues until low light, their fuel was low, however, their moral was high.

The following morning, he returned to the chaos with a good friend as his skipper.

“Across 3 boats for 3 days then continuing on dry land, we achieved close to 50 rescues, delivered food, water and medical supplies, responded to urgent concerns for welfare and retrieved 4 urns for families, many other Boaties did more than that. The amount doesn’t matter, 1 or 100. the civilian response did an amazing job, and each person should be proud of the collective contribution.”

Chris worked tirelessly for days and on the eve of returning to work the water had receded enough to return home for a night in his own bed before being tasked to help in Ballina the next day, for the first time as an official part of the emergency response.

When asked what his experience was like he reports

“The number of lives at serious risk in this disaster is of a magnitude I have never seen before. To put it into context I have deployed to Lismore in the 2017 floods, the 19-20 bushfires and the war in Afghanistan. This disaster, our community spirit and the boaties actions will go down in history, and rightfully so.”

Chris is someone who typically shy’s away from the spotlight, however, is deeply concerned for the mental health of other rescuers after what they experienced during this event.

“I worry about the metal health of the community but particularly the Boaties that risked their lives, heard the screams, and couldn’t help everyone. I often wonder how they are going, I know a few that are really struggling. Who is supporting these civilian rescuers?”