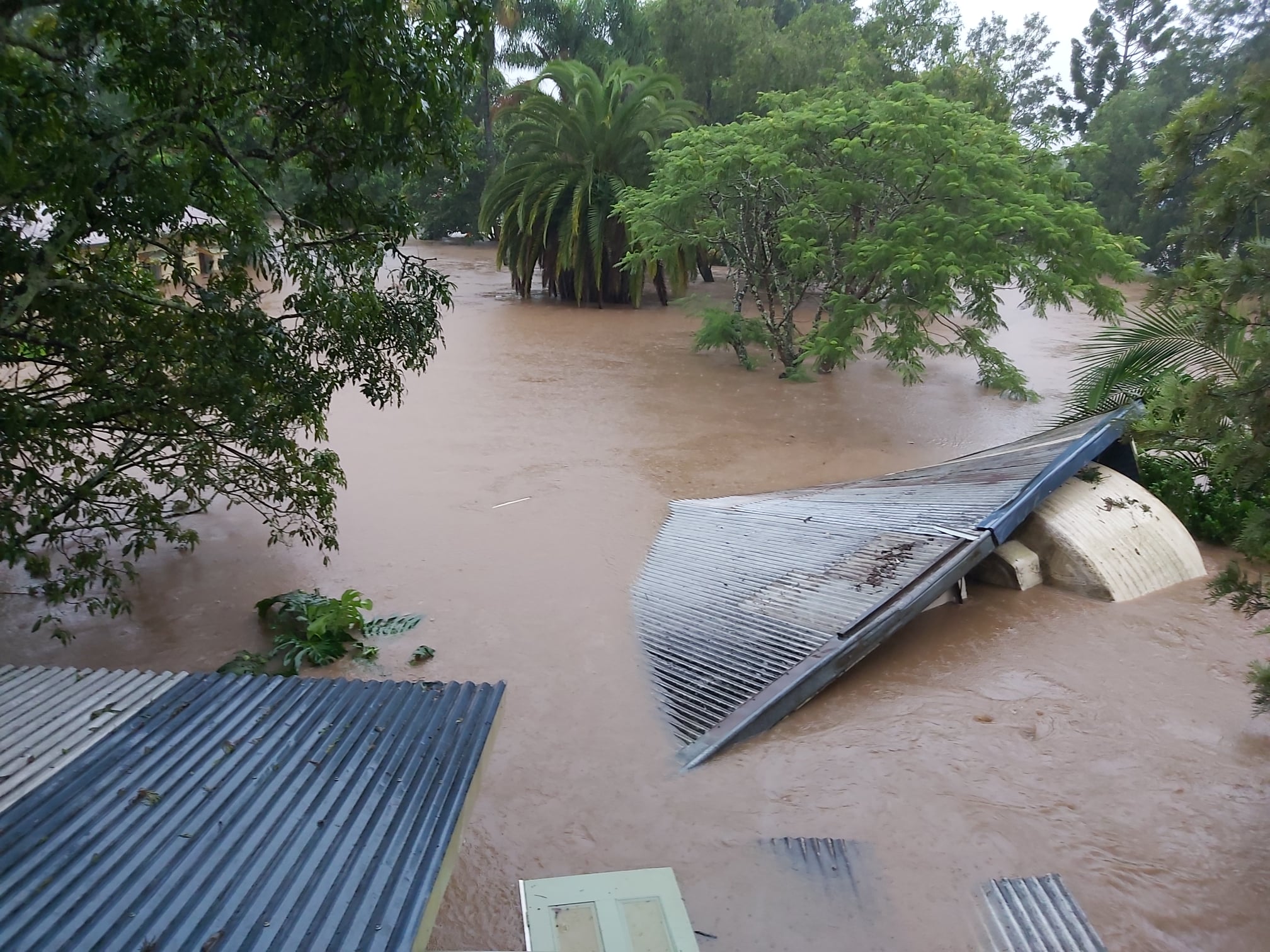 So it was Thursday morning, 4 days before the event.

I woke at my normal time around 6am, i checked my phone to see many missed calls from a friend of mine named Kyle. I called him back straight away to see what was going on. Kyle continued to tell me his story of his event, he lives up on the sunshine coast, he woke up in his caravan literally floating around inside on his mattress, his car got washed down the driveway and of course he was in shock and awe of the amount of rain they had overnight. Before the phone disconnected Kyle told me
‘dude get ready its heading your way.’
So that was how my Thursday started. I was mentally all over the shop, thinking about how best to prepare, will the rains actually make it to the northern rivers etc etc.
I sent out a few messages to friends in Lismore warning of Kyles story and that i think we should prepare, all responses were very calm and casual as if nothing to worry about. So i stopped worrying and slowly started raising items on ground level to the 2017 water level.
Surely this was over kill, but id rather do it now than in the middle of the night.
a few days go on, some say the flood might be a major flood, others were saying it would most likely be a moderate flood.
We are new to Lismore so we have never experienced the hype around flood time, its crazy, scary and sobering all at once!
Sunday midday; we were putting items higher on ground level and kept thinking we are going over the top with all this prep work, like how bad can it be!
I decided to move the cars to higher ground ‘just in case’, I was one of the first to put our cars up high which made me feel even more like i was being over cautious.
Sunday 11:30pm;
I am checking under the house to make sure everything is okay as i was ready to get some shut eye for the estimated peak at 6am. At the time we had maybe 10cm of storm water under the house which unfortunately is common for some areas of south Lismore.

We had SES visit us and explain we could evacuate now, but almost everyone is staying put as they think it might only be a 10-11m flood.

I wake up to realising the power is out and I could hear our neighbours/friends making noise, I come out to the deck with headlamp to check out how my stacks are holding up.
This is the moment I realised “holy shit”.
We had roughly 1m of water under and around the house.
I went back inside and woke up my wife Emma to tell her this shit is getting really hectic.
Once emma was up I wanted to explore a little more so went down into the water to try and save some items from under the house, at this point the water was at the 1974 height roughly.
At this time, one of my small red toolboxes floated past me, I grabbed it and put it up on the deck, just incase I might need it later.
6am:
Water coming into the house was a surreal feeling, carpet bubbling and bulging, bagging and thuds from below the floor boards of floating items becoming trapped. we decided to let the kids sleep until the water was above our ankles.
7am:
We decided to go up in the ceiling space when the water reached our knees, I luckily had a ladder handy so I put cushions, pillows, food, water, laptop and phones up in the ceiling.
I helped Emma get up first, I then passed Leo and Lulu up into the ceiling. they were safe, warm and dry!
My plan was to now get my little red tool box and see what was inside, I needed some sort of tool so I could remove the roof screws to ensure we had an escape incase the water kept coming.
I managed to have a pair of multigrips and climbed up onto the roof with my ladder via the submerged carport/laundry roof. I managed to undo roughly 40 screws to create an opening for the family.

Now my mission was to wave down a boat.

I needed to climb to the peak of our roof holding my umbrella and a torch. It was a massive overload on the senses, a helicopter circled our house from no more than 30m away, the wind, the water, the emotions was above max.
I focused on listening for boats and yelled louder and louder, no one seemed to hear me.
I thought I better check on the family and see how the dog was going, I needed a solution for our doggy as his island was slowly going under water.
I went back into the house and moved our mattress into the room with the man hole and I built him a floating pontoon with a mattress, bed frame and the laundry door which was floating around.
9am ish :
ok so entire family all good, now to get back onto the roof to wave down a boat.
I come out to the deck to once again put my ladder on the roof of the laundry/carport roof and there is this young cow standing there looking at me.
I needed the roof to get up higher onto the other roof, so I set up ladder next to the cow, but then she panicked and ran back into the torrent of water, most likely never to be seen again

I went up and was about to get on the peak again for big stint of waving and yelling when I heard some cracking and banging.

A large water tank had come down our driveway and was wedged under the carport… the pressure from the tanks floating ability and the water movement was the perfect combo to literally rip the building from its footings.

The building moved about 10m and got dumped up against a tree.

All I could think about was that was my easy access up and down the roof, I started using a tree to make the journey, not entirely sure why I went up and down so many times.

Mind was racing, difficult to stick to a task, waves of panic and fear, but also waves of great strength and adrenaline.
12pm:
A pair of young guys on a boat finally saw me and came and rescued us, entire family including doggy and 1 bag of clothes made it on the boat!
It felt amazing being seen and then rescued, driving away on the boat all shivering and cold looking back at our home, emotional to say the least.
Sorry for the long winded story, this felt amazing to write it down for people who actually understand the scenario!
Ever so grateful for our friends, family and community for getting us through to the 3 week mark.
What a roller coaster it has been and will be for many months if not years.
Big love to everyone who has directly supported us as a family, us as a community and us as Humans doing what needs to be done to over come these incredible events.
Lots of Love and Peace! Take care