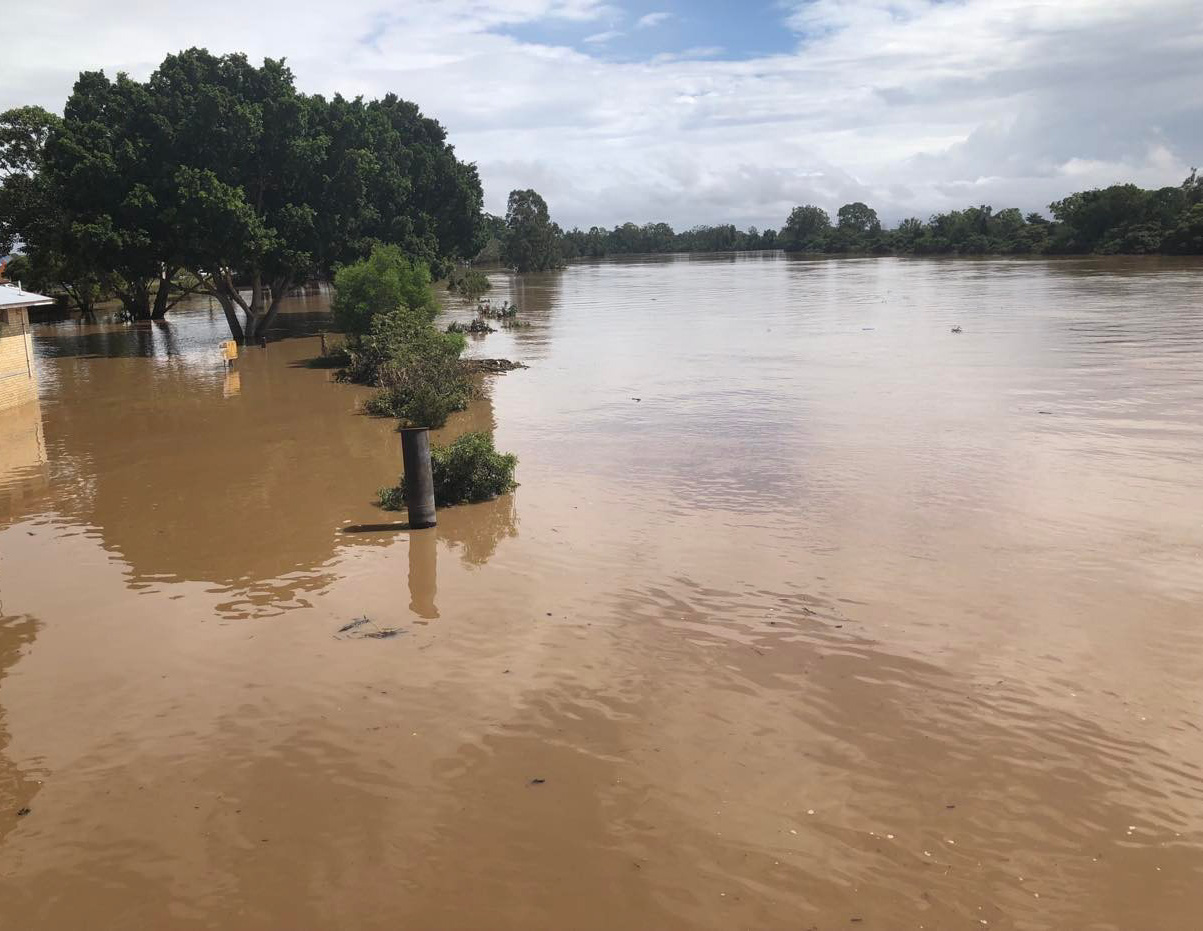 Three couples, a two year old and Anonymous awaited recuse overnight on a roof in Coraki while snakes crawled on the roof and cows drowned around them.

This is my story…

Around 11 am on Sunday 27 Feb I received a message from my friend where my household items were being stored that a minor to moderate flood was impending and we needed to move as many of my things as we could to the second story of his Ewing Street unit out of the garage, which was done.

My daughter contacted me and told me to return home immediately as it was unsafe where I was in Lismore, and I did so, returning to Coraki NSW 2470.

I got home and we (my daughter and I) quickly went to the local shop in Coraki (Spar supermarket) and grabbed enough supplies for a week in case we were flooded in, as only a few years before we had been through the 2017 floods and prepared on the knowledge of that experience, not realising the devastation that was just around the corner, then headed home.

Within hours of being home we were completely flooded in by surrounding roads, while in the house trying to put everything up as high as we could in our 2-story home.

Having an extremely restless night with the water getting higher and higher, by 3 pm the next day (28th Feb 2022) the water had risen to the second story and was lapping into the house.

At this stage we had 3 couples, a 2yr old and myself, taking refuge, as this was the safe house and had never flooded into the second story in the history of the house.

By 4pm that same day (28/2/22) we had to quickly run around the house trying to gather 2 cats, 2 kittens, 2dogs, the baby, 7 adults and essentials we would need and put them on the kitchen table, trying not to panic as the water was up to our knees inside our home at this point.

Realising the water was rising extremely quickly and we could not stay inside the house for much longer our only option was the roof. We looked for access to the roof as the front and back doors could not be opened with the water levels at that time.

Luckily, we found a window that gave us access to the carport, from there we would be able to climb up on the roof of the house.

With the clothes we were wearing, through the window we passed the baby, 2 dogs, 2 cats, 2 kittens, 7 adults, and climbed onto the carport roof then up onto a very angled corrugated iron roof one at a time.

We had to take our shoes off as they were very slippery and the roof being so steep and angled, we could not hang on.

We needed to climb to the back of the house where the was a small, corrugated veranda roof that was flatter and much safer.

Unfortunately, several of us slid and cutting ourselves on the corrugated iron in the ordeal.

All the while in the heavy rains and flood waters surrounded us, but we managed to get all including pets to the back. Scared, wet, hearts pumping; the men risking their lives went back into the house full of water and pulled from it a tarp, a couple of camp chairs, a small esky and milk for the baby. We desperately needed some sort of shelter especially for the baby from the weather. We had no idea how long we would be up on the roof.

From 4 pm 28th Feb 2022 we started calling 000 and emergency SES lines for someone to save us to no avail, they were too congested with calls, continuing to call for hours.

With our phones running flat, we had to contact friends on social media to keep fighting for us, as we had to preserve the last of our batteries. At this stage it was sheer panic no one would find us and the waters would engulf us.

Finally, and sadly getting a message 5hrs later around 9pm that unfortunately the 1 helicopter and 1 boat had stopped at 6pm for the night as it was too dangerous at night to continue, and we were not going to be rescued until the next day if we were still alive.

The waters were much too dangerous for the little tinnie boats to come out of locals. As I was told later there was only one SES boat trying to save hundreds. Even though friends wanted to risk their lives to get to us and as I believe did try but violent moving flood waters stopped them in fear of losing their own lives.

Cold, wet, scared, huddled together and hanging on the roof the boys stood watch all night as we had several snakes crawl onto the roof trying to get out of flood waters, along with every creepy crawly known to mankind, we had 100s of mosquito bites. Cuts, bruises and most probably hypothermia.

We could not see anything as it was pitch black through the night although as we huddled in the rain, cold and darkness we could hear cows screaming and drowning throughout the night… along with other animals all around us.

After a couple of days altogether and 16hrs of that on a roof, with flood waters rushing past at scary speeds, not knowing if we were going to be saved approx. 8.30 am on Tues 1st March 2022, we were so happy to see an SES boat pull straight up on our roof, we thought we were saved.

They took us to the nearest island at Coraki, only to realised we were not saved, there we had no medical attention, no blankets, no water, no food, no shelter, no electricity, no phone service, dropped in just the wet flood-soaked clothes we had on our backs with no shoes… and no one to guide us.

The church was doing the best they could as an evac centre, although we were all cut off from everything still, we were in the exact same position, just not on a roof. The elderly, children and young families filled the church. There was nowhere for us to go except to sit on the concrete foot path and try to dry out in the sun, we went from hyperthermia to being burnt as there was no shade either.

After a couple days of being on the island, we still had not eaten, there was just not enough food, water, blankets, shelter to go around, despite local community trying their best.

A local young couple offered myself my daughter and another 3 people shelter in their home, however, to get to their home we had to walk through waist high flood water for approx. 300metres the current was incredibly strong, on the first attempt I had to retreat, the second attempt I had two people on either side of me helping me walk across successfully, pulling me against the current, and finally that night had a small meal with what little food they had. At this stage we had not eaten for nearly 3 days.

Fighting to survive ourselves and helping as many as we could, with no electricity, phone or internet, no food or little food and water, no blankets, no shelter, no medical, no showers or clothes or shoes.

It was not until the following Sunday 6th March that supplies started to roll in: not enough for everyone.

This was not the end, as soon as the water receded enough, even with the overwhelming amount of trauma, malnourished, in desperate need of medical attention and the rest it was straight into days of clean up trying to salvage and clean out our home, helping others with their homes and businesses as our home still after a week was inaccessible with no or little help from the outside world.

Unfortunately, I became ill and had to be taken to Newcastle having to leave my daughter behind, to seek medical treatment as there was no way of getting through to Gold Coast hospital, Lismore was still underwater and overwhelmed and I was just one of thousands needing to see a doctor but not acute enough to be seen in our local area, so I was driven to Newcastle 570kms away where I was seen by a doctor. I had blisters, cuts, breathing difficulties and my skin was peeling which I received medication and creams for. Arriving back to the area on the 19th March 2022.

When my daughter could finally access the house on the 10th March 2022, I discovered nothing could be salvaged losing all my household appliances, furnishings, electrical, clothes, business equipment (as I had an entertainment business/mobile DJ), tools, camping, sentimental items, photos, documents, my dentures, glasses, medical aides and equipment. My car after being in 15ft of flood water with a pole speared through the front into the radiator right through and damaging the alternator and engine as well. More than $100,000 lost.

Currently, I have no home as the rental property at East Coraki is condemned and permanently unliveable. I have no temporary accommodation as there is nothing available under the great demand and stress on the current accommodation situation and the current rental crisis.

I have used all my savings and I have lost everything. The beautiful donations from around Australia are amazing however I cannot accept anything for e.g. white goods, beds, blankets, clothes as I have no home and have nowhere to store nor put them. So only people that still have homes can take advantage of these lovely gifts leaving the most severely affected like myself unable to take advantage of these amazing opportunities to rebuild lives.

I have no transport.

I have rung the red cross and was told that all of the funds allocated had been used up.

So far, I have received no help as I believe there is just no help left as we were stranded for so long. First in best dressed I suppose?

The only funds I have been given is $1000 from Centrelink which I had to use on a hire car to get me back home and to live in for the week as there is simply no accommodation.

I just turned 50yrs old and have no way to rebuild my life now that I have been diagnosed with extensive white matter brain disease and advanced multiple sclerosis and can at best only now work part time, working hard all my life to acquire what I have, now it is all gone, and I just don’t know where to go from here.

At this stage I don’t know what is worse, the trauma I have been through… or surviving it!