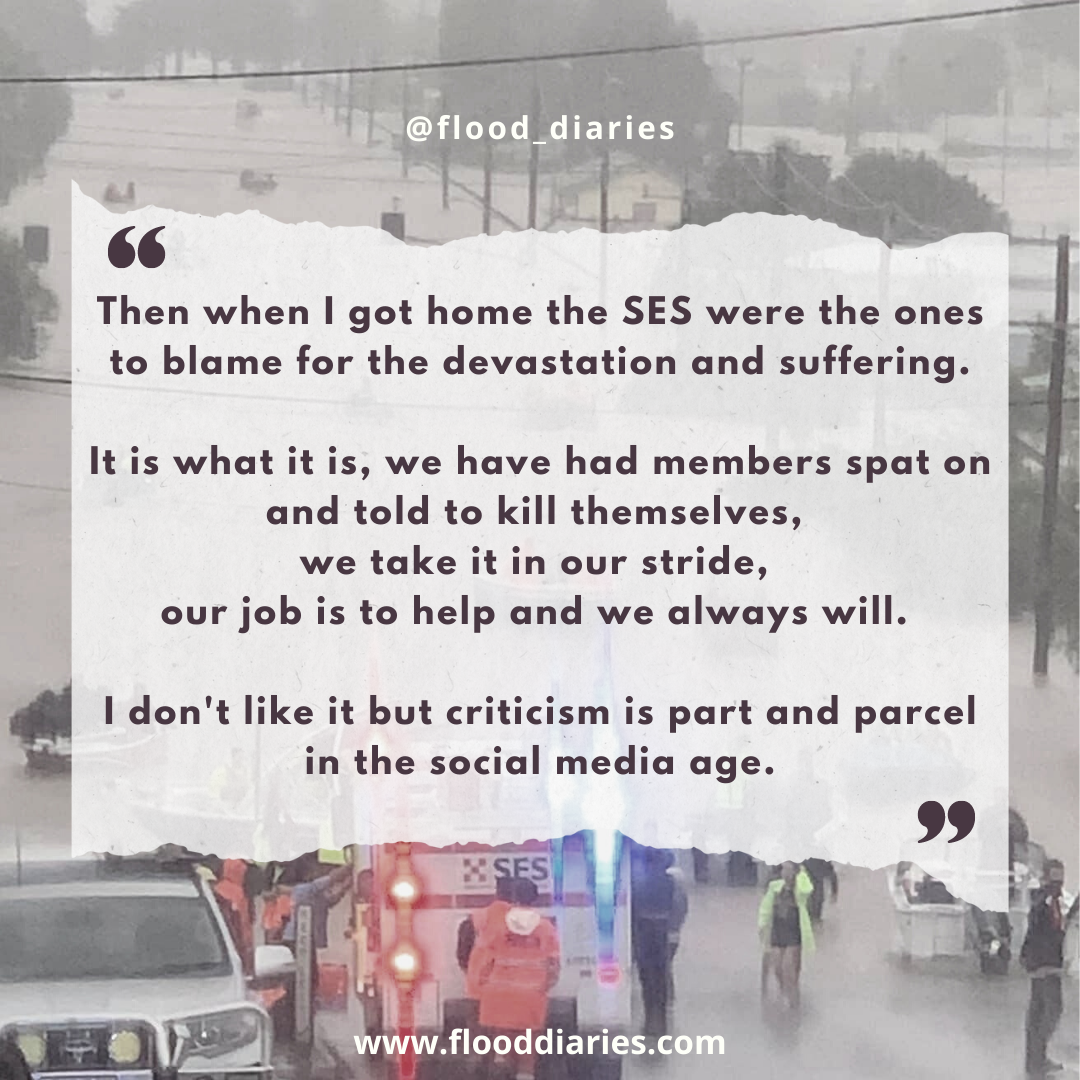 Where were you when it started?

North Lismore and evacuated to Goonellabah on the 27th

Our family was displaced , we lost our cat, my first pet, we lost everything we own, I am medicating with valium to keep calm.

What was your experience like?
I have been a member of Lismore SES since October of 2017, seeing the devastation of that year’s flood compelled me to help my community at a greater more skilled level.
On the Saturday with the warnings current and watching the weather situation worsen in Brisbane I did not want to be isolated in North Lismore not having lived there for a flood before, I Evacuated my family and my dog with my partner, we reasoned if the water only came up to the predicted 10.6-10.8 we could go back and get our cat as he was high and dry and had plenty of food and water.
We stayed up all night listening to the rain that we have never heard in either of our lives terrified of what was happening in our house and watching countless flood updates and warnings and orders flow in.
I was classed as INACTIVE in December due to not being vaccinated before the mandate came in for SES members, I was not against the vaccine I just hadn’t found time to do so by the time the mandate rolled around, as a result I was on a bit of a hiatus until the morning of the 28th .
I awoke at 5am and took in everything I could from Facebook and messages from people and called a friend who was on his roof in south and tried to provide him with the best info to save him and his family.
By 8am I contacted my unit commander who told me to come and help evacuate our UNIT , it was going to go under
By 8:30 I did what alot of us do,
I told my partner I loved her, kissed her and the kids, put on the little gear I had
(ses jacket and a pair of trackies and the timberlands) and walked out leaving my family behind.
By 9:30 I had helped evacuate the unit, moving vital equipment and records to higher ground including the personal possessions of the flood rescue techs already in boats and in the water.
By 9:30 I had travelled to Ballina road launching area where we had been telling locals to launch their boats from.
I am not allowed in the flood water or boats etc as I am not adequately trained, this is important to note as it is a requirement that saves lives.
4 of us went to Ballina road and I jumped in a boat with two big Fijians and a local boat operator and we went to grab a lady from Ewing Street.
We removed the tin sheeting and removed the lady and two dogs and a chicken 10:30 we had “docked” at Ballina road and I switched into another boat, transported people from Wyrallah road to Ballina road.
The next boat I jumped in had a fellow SES boat tech in it and we went across the river, the water was moving tremendously fast and strong.
Now having an SES radio to take calls we removed 4 people from the station hotel, circles back to a call for someone trapped in hurfords building who was already being rescued by another SES member in a public boat.
We travelled through south and rescued a family from their house I’m not sure of the address there. I was shivering head to toe all my clothes were soaked through.
I called my day to go, get rest and confer with other members who were still going, to see what I needed to do moving forward.
How did people in your community respond?
The community response was unlike anything I have seen, they banded together from all areas to converge and help the other community members.
Then when I got home the SES were the ones to blame for the devastation and suffering.
It is what it is, we have had members spat on and told to kill themselves,
we take it in our stride,
our job is to help and we always will.
I don’t like it but criticism is part and parcel in the social media age.
The boat rescuers both emergency services and particularly the community are legends and the community owes them a debt of gratitude and respect.
What is your situation like now?
We have lost our house and all our possessions and our kitty cat which is horrible but we are one of many, we are moving away we aren’t prepared to do this again, as I write this I have already left the SES in Lismore and am watching another major flood event take place.
What are your feelings about what happened?
I don’t really have words for that, I am just anxious all the time, my temper is through the roof. My partner and children are suffering. They aren’t used to seeing or hearing about the things that I do.
What is the memory you think you will hold with you in 10 years?
Walking across North Lismore Bridge and just getting an eyeful of what was happening under our boats as we travelled through areas. The amazing community spirit. The generosity that was shown by our loved ones in our time of need.
Is there anything else you think is important you would like to add?
When you ask where the Police, SES and Army were when it all hit the fan, have a look around, it’s not hard to find photos of us in the carnage,
we are always there,
we start days before and don’t ever finish.
When you ask why they didn’t help the community….we are part of the community and we lost it all.
Anonymous

2 thoughts on “When you ask where the Police, SES and Army were when it all hit the fan, have a look around..”